Rio’s culture and vibe is evident the moment you arrive. The people are friendly, energetic, and very proud of their country. You’ll notice the metro (trains) are noticeably louder than in other countries as people yell as they sell candy, pop, water and beer to patrons (my husband was especially fond of the beer selling on the metro). Sporting events erupt with “Bra-Sil” chants throughout the event. I loved the energetic vibe felt in every area of the city and found the people to be very helpful and kind while navigating the city. 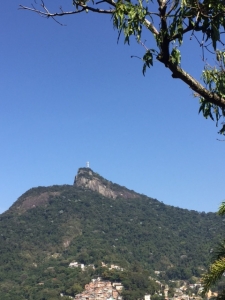 Of all the AirBnBs we’ve stayed in Contemporary House in Rio’s Forest was far and away the best! Bea is an excellent hostess and treats her guests like family. The home is a modern, eco-friendly home with views of Christ the Redeemer in the artsy Santa Theresa district. Tyler especially enjoyed the morning visits from the monkeys on our deck who loved him (and the bananas he fed them).

We loved Bea’s cooking, appreciated the extra effort she made to take us to the market for food, and the comfort of feeling like we were at home in her magnificent guesthouse. I would come back to Rio just to stay at Bea’s place! 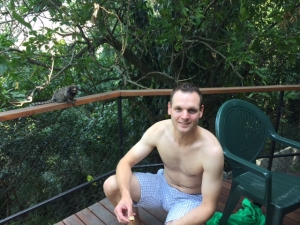 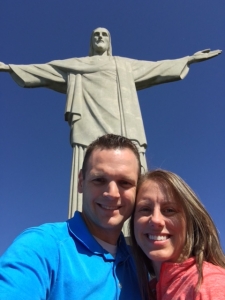 There are several ways to reach Christ the Redeemer including the train, bus, driving part of the way up, or for those of you who are extreme athletes running or biking up the mountain…which is crazy!

We chose the bus because it left from the same Metro stop we were staying, Largo do Machado, and we weren’t required to pay for the tickets in advance. It was also a shorter ride than the train.

Be prepared for multiple lines and get there early (before 8am) to avoid really long lines. We arrived at 7:40am and waited 50 minutes in the first line for a bus ticket. There are also lines once on top of the mountain for security checks and lines for transportation down the mountain after seeing Christ the Redeemer.

We found the best souvenir shop (there are many) at the base of Christ the Redeemer across from the restaurant. If you’re interested in booking a tour, versus going on your own, I’m not the person to ask as tours generally make me go a little stir crazy.

I found the metro very easy to navigate. Be aware the metro schedule differs between the weekdays and weekend and the buses don’t run as late as the trains. It didn’t cause us many problems because Uber is located throughout the city and was very affordable. The best part about transportation in Rio is the ability to move throughout the city without the use of a car. That being said the buses and metro don’t always run on schedule. There were many days it took a long time to get a bus and days the metro stopped for extended periods of time or skipped stops completely resulting in many Olympic spectators and volunteers arriving late to venues. Try to get on a bus and the metro but have a backup plan in case one or both is delayed.

My husband and I read many articles regarding the safety concerns in Rio. We were prepared for pickpocketing, mugging, etc. but didn’t come across any issues. This could have been due to police officers on every corner of the city during the Olympics so be cautious when visiting outside of the Olympic timeframe.

As you know the lack of ticket sales primarily resulted from Zika virus. Many of our family and friends were concerned about us going to Rio due to the virus. The Olympics were held during Rio’s winter and we didn’t see, nor get bit by, one mosquito during the two weeks we were there. So if you want to visit Rio during their winter months GO!

The two main beach locations are in Copacabana and Ipanema. Ipanema is considered a nicer area of town but Copacabana is more accessible by metro. You’ll enjoy soft sand and plenty of sunshine no matter which beach you choose to visit.

If you’re looking for an upscale part of town for shopping, dining, and more beach options be sure to stroll through Leblon. It’s a very safe area of town and if you’re in search of a really nice place to eat with amazing seafood, meat options, and wine selection while in Leblon I would highly recommend Giuseppe Grill.

Overall Rio is a city filled with sunshine and a relaxed atmosphere. We found the culture appealing as the city caters to women with children, people with disabilities and the elderly nearly everywhere you go (metro, grocery stores, ticket lines, etc.). With the current exchange rate a vacation in Rio is definitely an affordable opportunity to experience the Brazilian culture!